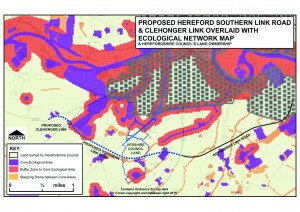 This map shows the proposed Hereford Southern Link Road and Clehonger Link overlaid with the “Ecological Network” map produce in 2013 by Herefordshire Council.It also shows the Herefordshire Council Land ownership.
The Ecological Network map is part of the Core Strategy Local Plan which  states (para 5.3.16) “Development within and adjacent to these core areas and associated
buffer zones will need to be sympathetically designed to ensure there are
no adverse impacts upon them.” Note the “NO ADVERSE IMPACTS”. The map is somewhat limited as it does not necessarily include all important sites and linkages. For example, the footpath between Grafton Wood and the A49 should qualify as a wildlife corridor, as it is clearly an ancient track with old hedges on both sides, and a clear ancient boundary bank on one side.

Despite its limitations in showing the minimum recorded ecology in the area of the Southern Link Road, please note the following on this map:-

THE SOUTHERN LINK ROAD CANNOT CONCEIVABLY HAVE “NO ADVERSE IMPACT” UPON THE CORE ECOLOGICAL AREAS & BUFFER ZONES. IT IS CONTRARY TO THE NATIONAL PLANNING POLICY FRAMEWORK BY REDUCING ECOLOGICAL RESILIENCE.

Since 2013 there has been no funding for any staff to record and maintain the evidence of the range of animals, plants and organisms that live and breathe alongside us in our  beautiful County.

The Ecological Network Map is not easy to decipher and is low resolution but by spending hours keying it to base mapping, and boosting the resolution, it is possible to localise the map. Here for Hereford would like to express thanks to a member who has made this map available and overlaid it with the route of the proposed Southern Link Road. The alternative would have been to spend £150 for the Herefordshire Biological Records Centre to prepare a legible localised copy.